As world market leader for image licensing, Getty Images, announced yesterday, a new Embedded Viewer will allow non-commercial use of millions of their images – at no cost. In a first step, Getty has published almost 13 million images under the Terms to be used on websites, blogs and social media. Check out their free embed offer here! 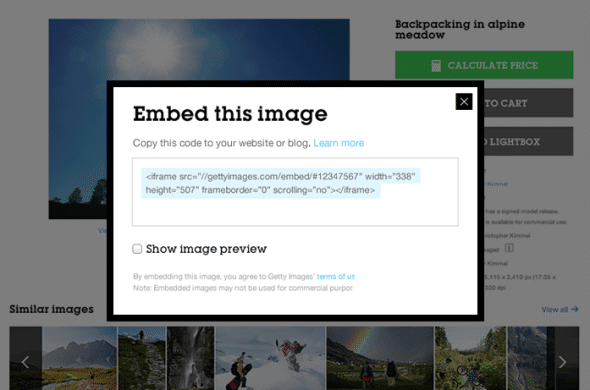 On their website http://www.gettyimages.com you can now find an icon on images bringing up an HTML code for a so called iFrame which can be included in most websites and many blogs. This iFrame contains the image itself along with a backlink to the original picture as well as credit lines for Getty and the photographer. It also allows publishing on Twitter and Tumblr.

The use is free but comes with conditions

In their new adapted Terms and Conditions, Getty Images added a section for the “Embedded Viewer” which contains limitations of the use: The embedded images may only be used in Editorial Uses which include information that is newsworthy or of public interest. This would allow the use in most blogs and websites, including those running ads. However, the use is prohibited if any product is being sold or promoted or any other commercial use with the image.

There is also an important section contained in these Terms:

This indicates that Getty Images (check their current Gettyimages promo code) might – at a later stage – use the embedded viewer to display advertising along or in front of the actual image. This is quite similar to what already is reality with Youtube Videos which might be embedded on websites but will show ads along with the video. Getty also reserves the right to collect data along with the use which might require adaptation to each website's own privacy policies before using the embedded viewer.

However, the new Embedded Viewer might allow free access to a broad audience of publishers and bloggers who were not able to afford licenses in the past.

Getty Images is arguably the most prestigious and well-known stock photography agency in the world. Its strong global presence, huge pool of images including exclusive collections, and impeccable reputation make for a first-class, premium stock photo service like no other. Working with Royalty Free images, both for commercial and editorial only use, Getty Images has the perfect photos for your every need.

You can buy these premium photos on demand. Royalty-Free photos cost from $125 to $500. But you can get them for as low as $100 to $375 each using an Ultrapack. If you're after top-class stock photography, Getty Images is definitely one agency to explore.

And you can explore it right now, using the search feature below. Enter your keywords, hit the button, and be blown away by the results!