Wemark, an innovative company that launched the first blockchain-based stock photography marketplace last year, has formally announced they are closing their platform.

Mainly due to market crash during their initial token sale that diluted their hard cap fundings, this incipient agency that had finally released their online marketplace earlier this year became unsustainable and as of now has closed its doors to new customers, image submissions and purchases.

Wemark was an Israeli startup that landed in the stock photography industry in 2018, aiming at completely disrupting it. Their proposal was to eliminate the stock photo agency's middleman role –that they claimed retained too much control and profit percentage– and facilitate transactions between artists and buyers through cryptocurrency: theirs was the first stock media marketplace built on the base of blockchain technology.

For this, they released a dedicated token and had a sales round to get both early supporters/potential customers and contributing artists on board. Earlier this year they finally launched their online marketplace with very good quality in images available for license and download, just like in any other stock photo site. The difference is they were using the blockchain system to handle purchases. And they even released two product updates during this time, improving image search experience, adding payment methods and several other user experience upgrades. 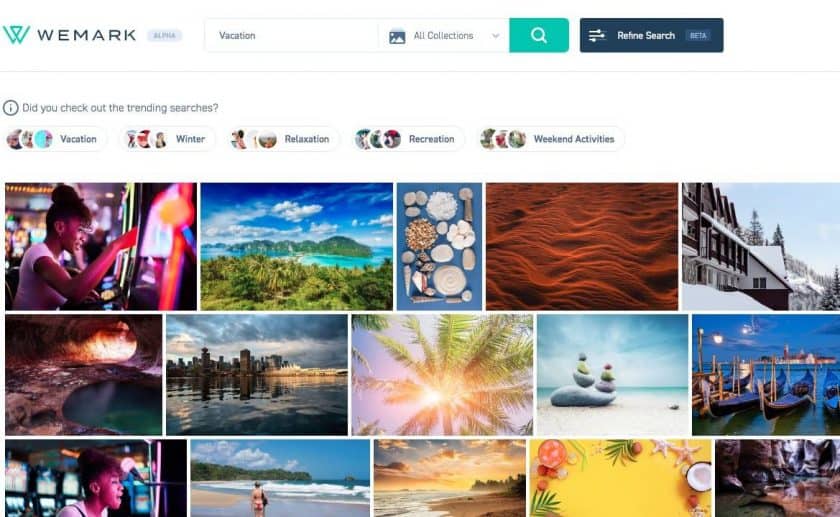 According to Co-Founder and CEO Tai Kaish, the main factor in Wemark not making it was the market crash that hit right as they had their token sale.

This led to, on one hand, them missing their fundraising mark, and on the other, to losing the financial institutions they were going to use to convert the collected cryptocurrency into tangible funds to keep the company running. In the time transcurred until they found an alternative solution, the market crash diluted most of the USD value of their cryptocurrency funds. Which mostly sealed Wemark's destiny.

While they still tried to keep the company alive by seeking investments and redefining their plans and reducing costs, and they still launched the online photo marketplace in an effort to recover, it wasn't enough and soon it became a reality that the company isn't viable.

This is why they have decided to shut down the operations for good. Current customers can still access their accounts and use up their already paid for allowances to get images, but as of now all new signups, image uploads and purchases are closed. And Wemark has officially said their goodbyes.

They surely had an ambitious idea and Kaish said they hope artists will still regain their power in the stock photo industry, even if it's not through their blockchain-based marketplace.

Had you heard about Wemark? What did you think of their plans? And what do you think of how things unveiled? We'll love to hear your thoughts!

Exclusive offer & coupon
days
0
0
hours
0
0
minutes
0
0
seconds
0
0
Get 15% on Everything at Shutterstock: Subscriptions and Image packs!

Buy your choice of stock images or stock footage at Shutterstock with a 15% discount on subscriptions and image packs.